​In this thought provoking post, MATES provide an interesting view on world suicide rates and statistics. This includes how many people around the world attempt suicide each year, as well as an indication of how many are having serious suicidal thoughts; and the common life challenges that can lead to people seriously contemplating suicide.

​Worldwide there are 800,000 suicides each year, with approximately 24,000,000 attempted suicides and 455,890 people every day having serious suicidal thoughts and needing a MATE to turn to. 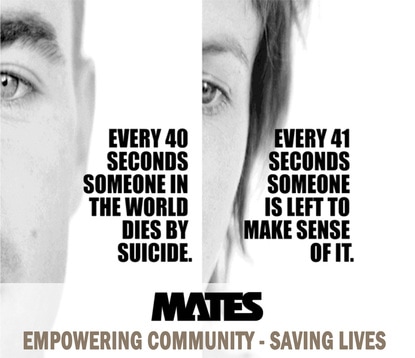 It is estimated that for every person who completes suicide, 30 more attempt suicide with another 206 people having serious thoughts about suicide.* Let's put these numbers into context so we know how many people are struggling with life's challenges and who need a MATE to turn to in a time of need.

Regardless of the number of people per capita, these are real lives at stake!
In 2017:
​
Australia had 3,128 suicides meaning there were approximately 650,624 attempted suicides and ​1,782 people every day having serious suicidal thoughts.

Canada had 4,157 suicides meaning there were approximately 124,710 attempted suicides and ​2,369 people every day having serious suicidal thoughts.

China had 128,586 suicides meaning there were approximately 3,857,580 attempted suicides and ​73,276 people every day having serious suicidal thoughts.

India had 210,869 suicides meaning there were approximately 6,326,070 attempted suicides and ​120,166 people every day having serious suicidal thoughts.

The United Kingdom had 5,821 suicides meaning there were approximately 174,630 attempted suicides and ​3,317 people every day having serious suicidal thoughts.

The United States had 47,173 suicides meaning there were approximately 1,415,190 attempted suicides and ​26,882 people every day having serious suicidal thoughts.

​From our experience in helping to prevent suicide in the global community for over 15 years, it has become quite evident to us that the most prominent factor in suicidal ideology is relationship breakdown in some form.  The negative outcomes from conflicts within ourselves and with others sets up an environment which encourages disconnection and isolation. 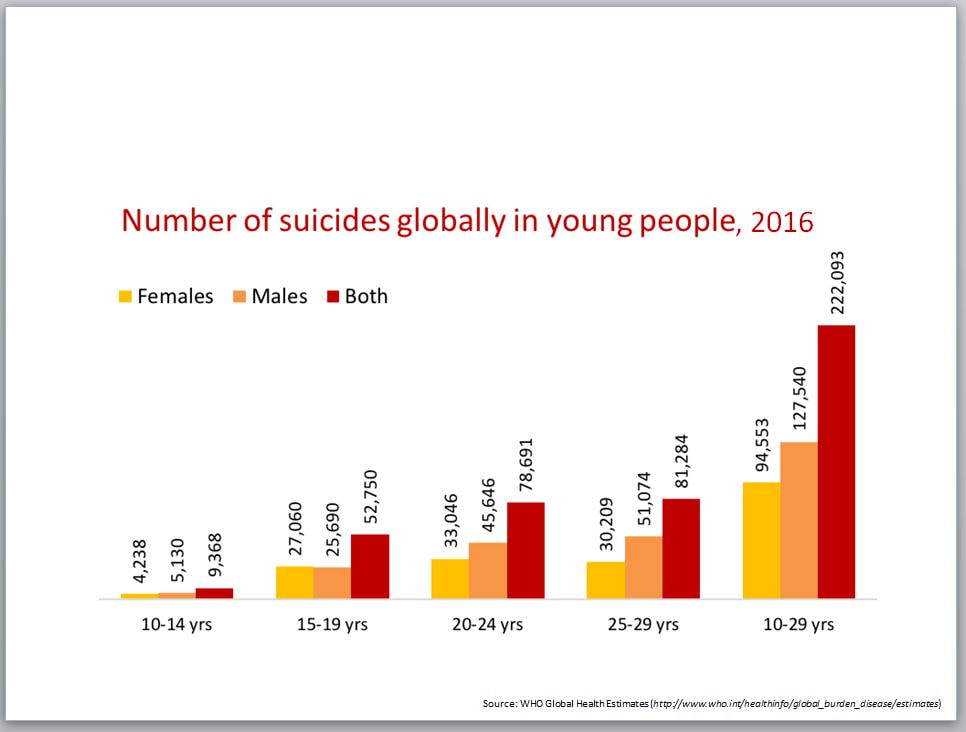 In the US (these statistics may be similar for other countries too), children from fatherless homes account for:
Suicide prevention is everyone's responsibility

Every person has the inherent need to feel better. Therefore, every action which a person takes is in the hope that they will feel better in what they achieve from doing that action. When an emotional response is triggered and is unresolved, a person often looks to an external fix to make them feel better. This may include smoking, alcohol, drugs, food, sexual connection, gambling, amongst other addictions.

The addiction is the incorrect belief that it is that “thing” that makes the person feel better. The thought of not having access to that thing (fix), triggers further emotional responses which unresolved, reinforce the need for the fix. It’s not the method of the addiction, but the underlying hurt and sense of disconnect that needs to be addressed, because this is what makes the person reach for a better feeling.

The Emotional Reset Technique provided in MATES Cafe Community training, neutralises the emotional response and brings the brain into an empowered state. In the moment the triggered emotional response is resolved, the need for the external fix disappears because there is no need for a dopamine hit.

​When a person feels out of control within themselves, it is a natural progression to then start controlling others to gain some semblance of control in their lives. This can result in bullying behaviour. An effective way to break the cycle of bullying is to teach children and adults how to resolve an emotional response whenever it’s triggered, then how to upgrade their actions and thinking to be aligned with how they truly want to feel.

Suppressing the initial emotional response (fight/flight or freeze/shutdown) causes an individual to default into a reactionary mode. This can include verbal and/or physical reactions. Fuel is added to the fire when the other person is also triggered into an unresolved emotional state. This compounds the sense of frustration as both individuals battle to feel heard and understood. Neither person can clearly communicate in this state and little to no self-control can be exerted until they learn how to control their emotional triggers.

Overriding human needs include the sense of connection and self expression. An unresolved emotional response can lead to us feeling disconnected and out of sync with ourselves. From an operational perspective, this makes us feel misaligned with others. It is the nature of the mind to analyse all present and remembered data. This frequently leads to judgmental thoughts about ourselves and others which triggers further emotional responses.

The mind then becomes engaged in an endless loop which analyses negative thoughts and the related emotions. The depressed state is exacerbated when the individual has problems which they don’t know how to solve. These may include financial, relationship, family, work and sexual function issues.

This is mostly due to the lack of a complete sex education which includes the mental mechanics of sex required to fully function as an adult. Without knowing what to focus on, or what to switch focus to, there is much anxiety and confusion involved in the sexual act. This commonly results in sexual failure. Statistically, up to 80% of people are affected by sexual dysfunction. ​

In some individuals, an unresolved emotional response leads to the need for sexual connection. Without knowing how to self-regulate sexual arousal, however, this emotional need can become a sexual obsession. This can result in inappropriate sexual behaviour, sexual misconduct, sexual assault or rape. The severity of the harassment will depend on the individual’s current mental and emotional state.

The negative outcomes from conflicts within ourselves and with others sets up an environment which encourages disconnection and isolation. Frequently tied in to the depression cycle, suicide is often a spur-of-the-moment action in an attempt to end the problem.

​For each suicide approximately 135 people suffer intense grief or are otherwise affected. This amounts to another 108 million people per year who are profoundly impacted by suicidal behavior. ​

​Wherever they are in the world, the point of suicide is the loneliest place on Earth for the person contemplating taking their own life. ​Together we can help decrease worldwide suicide populations by providing global access to breakthrough online programs and initiatives containing the necessary tools to overcome mental, physical and emotional challenges in peoples' lives.

​Giving people a proven technique to overcome the reactions to their emotional triggers as well as providing emotional support and encouragement, can help save lives.

Mind Renaissance which includes the power of the Emotional Reset Technique helps to align your mind and emotions to empower your relationships and your life.

​MATES help people of all ages, cultures and ethnicity overcome life challenges such as loneliness, relationship breakdown, anxiety, loss and grief by being there and helping them find new life direction.​ Need a MATE | Be a MATE